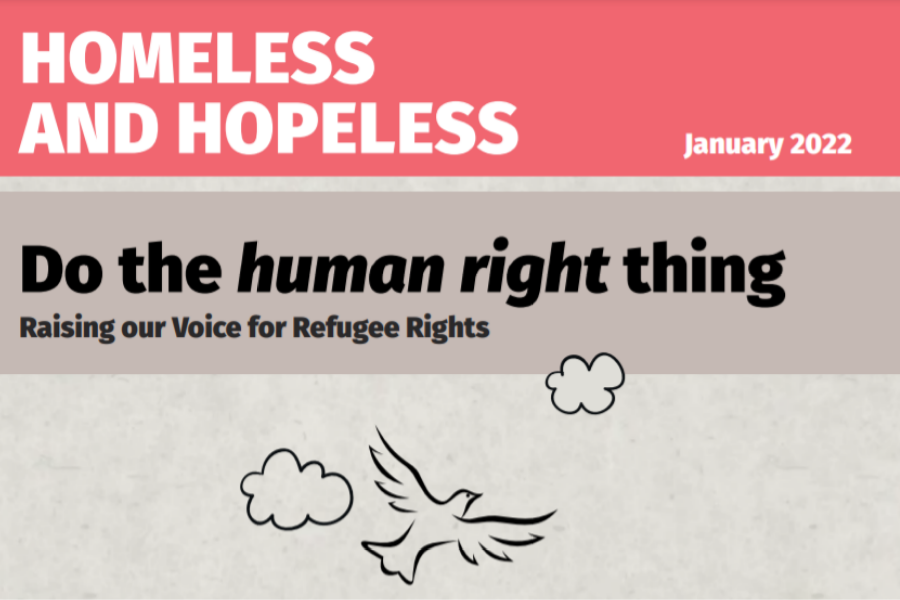 A new report from the Greek Council for Refugees (GCR), Diotima Center, and the International Rescue Committee (IRC) outlines the challenges to housing faced by asylum seekers and refugees in Greece. Gaps in housing policy have left many refugees and asylum seekers homeless.

Published today, the report titled “Homeless and hopeless: An assessment of the housing situation of applicants and beneficiaries of international protection in Greece”, found that homelessness is a reality for a significant number of refugees and asylum seekers.

Single women, unaccompanied children and other, extremely vulnerable people, live in abandoned houses or lack stable accommodation. Survivors of gender-based violence, experience new incidents, particularly of sexual abuse, while living on the streets. Evictions of refugees from reception facilities take place, without a plan to secure their housing. Hundreds of recognised refugees, even mothers with young children, pregnant, elderly and people with chronic health conditions, were forced to live in public squares for extended periods of time, at an immediate risk to their safety. Increasing isolation of asylum seekers in closed-controlled facilities continues, without guaranteed access to basic goods, such as heating and basic hygiene and protection from COVID-19. A significant number of respondents mentioning undignified conditions, such as bed bugs, insects, dirty walls and mattresses, at the time they first entered accommodation spaces of the ESTIA programme.

Starting from the principle that housing is a universal right, which requires inclusive policies to ensure that everyone has access to a basic life necessity, the report seeks to highlight the array of housing-related challenges faced by applicants and beneficiaries of international protection in Greece. A difficult task by nature, which is further complicated by the lack of sufficient official data, which when available, frequently end up raising more questions than the ones they answer.

«I am neither asking for a house, nor for an apartment in a good neighbourhood. [Just] one dignified room. In here, water is dripping [down the ceiling and walls and] it is cold during the winter.”

Amin*, Syrian asylum seeker, father of two, living in a refugee camp on the Greek mainland

The report also underlines the ongoing gaps and the consequences of the EU and Greece’s policy on migration, with respect to the growing housing insecurity faced by asylum seekers and refugees in Greece, which ends up also hindering their access to other rights, such as employment and healthcare. These policies, in fact, undermine the overall process of integration for those receiving international protection in Europe –a process which in Greece is further challenged by the lack of language learning programmes at the stage of reception. In this context, refugees’ prospects of being included in the Greek society are further hindered.

“I would like to learn [Greek], to know the [Greek] society. But I can’t do that from here”.

Anwar*, Syrian asylum seeker, living in a refugee camp on the Greek mainland

“I never got the chance to request accommodation or the financial allowance. Just a few days after receiving my asylum seeker’s card, I underwent the [asylum] interview.

I want and I am striving to find a job, my family sends me money, but I have to make it on my own. I enrol to courses and l am learning the Greek language. But it is difficult to find [a job] where I don’t feel exploited”.

Lastly, the report provides a series of non-exhaustive recommendations to the Greek state and EU Institutions, guided by the need to implement sustainable solutions. In this context, relatively recent initiatives for the implementation of social and affordable housing programmes in Greece should be supported in an inclusive manner, as a necessary condition for respecting everyone’s right to housing, while prioritising the most vulnerable social groups, including refugees.

“They have told me that I am no longer eligible for the [ESTIA] programme and that I will soon have to leave [the apartment]. This [system] must change. When someone receives international protection status, they should have the opportunity to stay for a little longer. I know many people who were granted status and ended-up in the streets”.

As part of the research, the partner organisations created a joint questionnaire, addressed to asylum seekers and refugees, covering demographics, housing, employment and healthcare. From a sample of 30 reliable questionnaires that were examined up to the time of publication, the following are some of the issues that arise with respect to the housing situation for asylum seekers and refugees in Greece:

*All names have been changed to protect the persons concerned.

Questionnaires will continue being collected/examined as the project continues and more data will be published later in 2022.

Τhe “Do the human right thing – Raising our Voice for Refugee Rights” project is implemented under the Active Citizens Fund program, with Project Promoter the Greek Council for Refugees (GCR) and Partner Organizations the Center Diotima, the International Rescue Committee Hellas (IRC) and Popaganda.

The Active Citizens Fund in Greece is supported through a € 12m grant from Iceland, Liechtenstein and Norway as part of the EEA Grants 2014 – 2021. The program aims to develop the sustainability and capacity of the civil society sector in Greece, and to strengthen its role in promoting and safeguarding democratic procedures, active citizenship and human rights. The Fund Operator for the Active Citizens Fund in Greece is Bodossaki Foundation in consortium with SolidarityNow. More information: www.activecitizensfund.gr/en/.

Tags: Accessibility, asylum seekers, Barriers, housing, human rights, Press Realease, refugees, reporting
Copyright © 2022 Διοτίμα
Manufactured by Sociality.
We use cookies to ensure that we give you the best experience on our website. If you continue to use this site we will assume that you are happy with it.